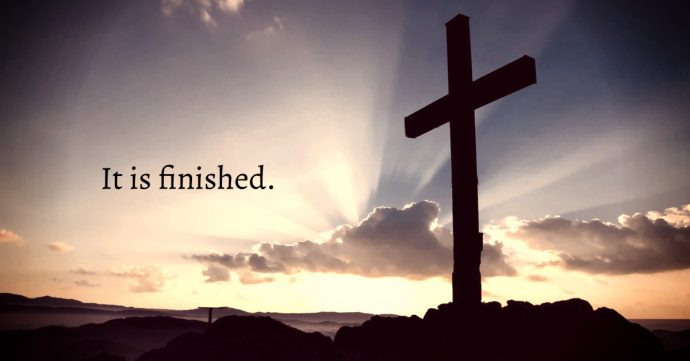 John 19:30 says, “When Jesus had received the sour wine, he said, ‘It is finished.’” So, what exactly was “finished” when Jesus spoke those words from the cross just before He died?

The first thing that was “finished” was Jesus’ fulfillment of the Old Testament Scriptures that prophesied and pointed forward in various ways to His crucifixion. John repeatedly says that the things Jesus experienced happened to fulfill the Old Testament Scriptures (John 13:18; 15:25; 17:12; 18:9, 32; 19:24, 28, 36, 38). In verse 29, Jesus had just been given sour wine in response to his cry of thirst in verse 28, echoing and bringing to completion the experience of David in Psalm 69:21, where David says of his own enemies that “for my thirst they gave me sour wine to drink.” Jesus taught that the whole Old Testament was written in anticipation of his life and work—not only the direct Messianic predictions of the prophets, but also the images of the sacrificial system and even the historical experiences of Israel and its leaders (John 5:39; Luke 24:27). In his final suffering and death, Jesus’ fulfillment of Old Testament prophecy and history accelerated and intensified, and in His final moments, He knew this Scripture-fulfillment aspect of His suffering was complete when He said, “It is finished.”

A second thing that was “finished” when Jesus spoke these words was His perfect obedience to God the Father on our behalf. “He humbled himself by becoming obedient to the point of death, even death on a cross” (Philippians 2:8), submitting His human will to the divine will of His Father (Matthew 26:39), and fulfilling the charge He had been given (John 10:18). Here, just before entrusting His spirit into His Father’s hand, Jesus affirmed that He had fought the good fight and finished the race (2 Timothy 4:7).

A third thing that was “finished” (all except the fast-approaching experience of death itself) was Jesus’ atoning suffering for sinners. On the cross, Jesus had finished enduring the full weight of God’s wrath that our sins deserved, an innocent victim vicariously bearing the iniquity of us all (Isaiah 53:6), a Good Shepherd laying down His life for His sheep (John 10:11).

Guilty, vile, and helpless, we;
Spotless Lamb of God was he;
Full atonement! can it be?
Hallelujah! what a Savior!
(Philip P. Bliss, “Man of Sorrows! What a Name,” TPH #352)

There is nothing you can add to the sufferings of Jesus to make you more acceptable to God. “There is therefore now no condemnation for those who are in Christ Jesus.… God has done what the law, weakened by the flesh, could not do” (Romans 8:1, 3). Never forget that Jesus’ work for you is a finished work, and you cannot add any of your work to it to make it better. His sacrifice cannot be repeated. His obedience cannot be supplemented. His grace cannot be improved upon.

Lifted up was He to die,
“It is finished!” was His cry;
Now in heaven exalted high;
Hallelujah! what a Savior!