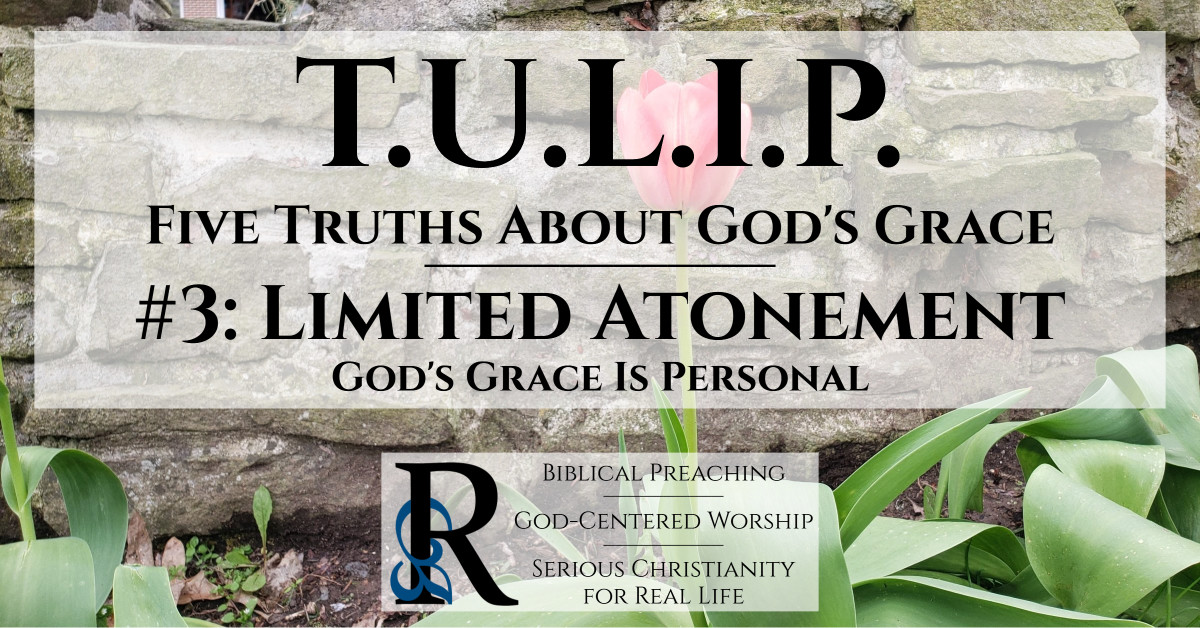 The L in T.U.L.I.P. stands for limited atonement. The word “limited” might seem to have a negative ring to it. But the point of this phrase is actually to communicate something very precious and assuring: that God’s work of salvation is personal, not generic.

In this third truth about God’s grace, we’re trying to get at the question, “What did Jesus’ death on the cross really do?” Two possible ways of answering this question have been explained using the word picture of two bridges over a river. One bridge is very wide, but it reaches only part of the way across. The other bridge is much narrower, but it spans the complete distance between the two banks.[1]

In John 17, Jesus is praying to God the Father just before He goes to the cross. In that prayer, He says, “I am not praying for the world but for those whom you have given me, for they are yours” (v. 9). Earlier he had told the crowds, “All that the Father gives me will come to me” (John 6:37) and that “I lay down my life,” not for every human being, but specifically “for the sheep” (John 10:15). “I know my own,” Jesus said (John 10:14). That means that everything Jesus did, He did not for sinners in general as a faceless class. No, He lived and He died for a very specific group of sinners with names and faces, sinners whom He loved personally by name—His sheep, His own, given to Him by the Father.

Some people feel the Bible’s teaching about limited atonement seems too narrow, as though it somehow underestimates the real scope and power of God’s grace. But the reverse is really true. This doctrine means that when Jesus died on the cross, He was really dying for you, personally and specifically. His death didn’t merely make salvation possible for the human race; Jesus really saved his people from their sins (Matthew 1:21).

If the T in T.U.L.I.P. (total depravity) should make you humble, and the U (unconditional election) should make you grateful, the L (limited atonement) should give you great comfort. It should comfort you to think that on the cross, Jesus was dying for _______ (fill in your name), because He loved you; because the Father had given you to Him; because you are and always have been His sheep.

Would he devote that sacred head for such a worm as I?

Was it for crimes that I had done he groaned upon the tree?